There are three main types of seismic waves: P-wave, S-wave and surface waves. P and S waves together are sometimes called body waves because, they can travel through the body of the earth, and are not trapped near the surface.

A P-wave is a sound wave traveling through rock, the particles are alternately squished together and pulled apart (called compressions and dilatations), so P-waves are also called compressional waves. Generally these waves can travel through solids, liquids, and gases. Figure 1.

S-wave or shear wave (sometimes called elastic S-wave) and is one of the two main types of elastic body waves.

The name S, is for secondary, comes from the fact that it is the second direct arrival on an earthquake seismogram, after the compressional primary wave, because S-waves travel slower in the rock.

Rayleigh waves are a type of surface wave that travel near the surface body of the earth. Rayleigh waves include both longitudinal and transverse motions that decrease exponentially in amplitude as distance from the surface increases.

Seismic Refraction: The seismic refraction method, is performed by the measurement of the travel time of seismic waves, which are refracted at the interfaces between layers (L1) of different velocity. Seismic energy is provided by a source (S) located on the near surface and radiated out from the shot point energy, either travelling directly through the upper layer (direct arrivals), or travelling down to and then laterally along different velocity layers (L1) as refracted arrivals toward an array of geophones positioned in predetermined locations on the surface (G1, G2, etc.). Observation of the travel-times of the refracted signals provides information on the depth profile of the refractor. 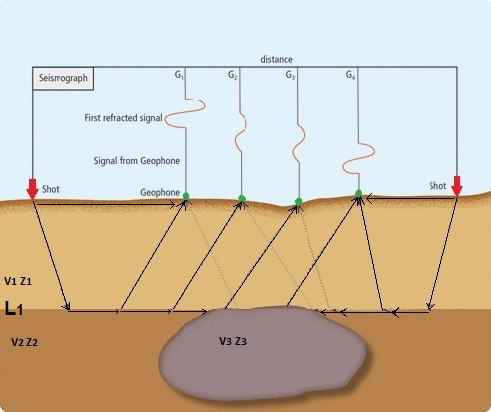 Refraction Microtremor: in the Refraction Microtremor method (ReMi), surface wave (Rayleigh wave) energy, generated using a passive (background) acoustic source, is recorded at predetermined receiver locations (R1, R2, etc.). A dispersion curve (phase velocity vs. frequency), generated from the acquired field data, is inverted and used to generate a 1-D shear wave velocity profile (generally “tied” to the physical centre of the receiver array). If additional ReMi data sets are acquired at adjacent locations, 2-D or 3-D shear-wave velocity models can be created. If environmental and structural features are known, these shear wave velocity models can be transformed into geological models. The ReMi technique is often used in tandem with the more traditional MASW technique as it enables to ability to gain information on subsurface dynamic moduli and shear wave velocity to greater depths than are achievable using MASW. However, as depth of investigation increases, spatial resolution decreases. 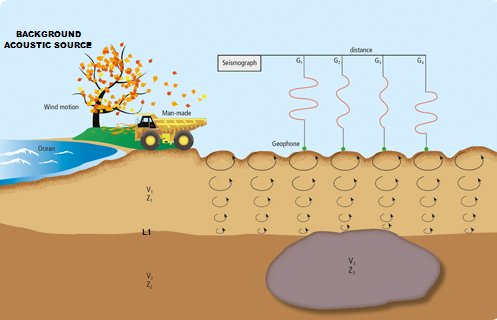